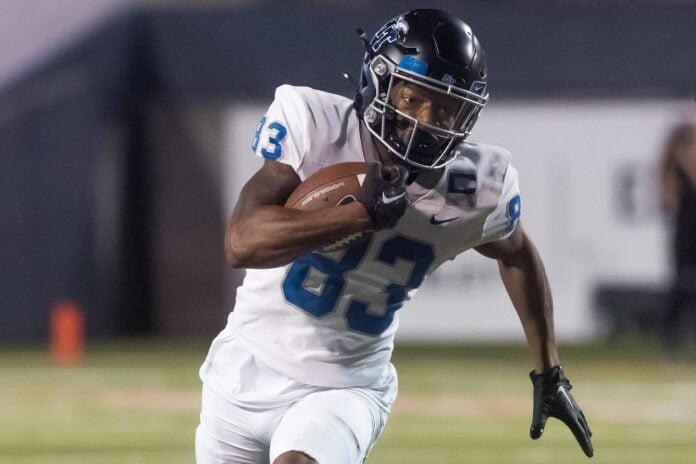 Virginia Tech grabs another talented WR out of the transfer portal in former MTSU standout Jaylin Lane as they look to overhaul a terrible offense.

As per an announcement on his social media on Jan. 9, former Middle Tennessee State WR Lane will transfer to Virginia Tech. An electric playmaker in multiple phases of the game, the fourth-year pass catcher was in the portal for less than a handful of days before finding a new home with the Hokies. Lane’s commitment reunites him with a team that showed interest in the three-star WR out of Clover High School but never extended an offer.

A multi-sport star at Clover, Lane earned All-State honors after tallying 76 receptions for 1,611 yards and 30 touchdowns as a senior in South Carolina. He owned every receiving record for the school before arriving at Middle Tennessee State in 2020, where he played seven games in his initial campaign at the college level.

The diminutive WR snagged his first touchdown in his true freshman season and led the team in kickoff returns. Developing into an integral part of the Blue Raiders team in 2021, Lane snagged 42 receptions for 466 yards and four touchdowns while leading the team in punt returns and kickoff returns. He also added a 70-yard punt return against Monmouth, flexing his special-teams prowess as the MTSU Specialist of the Week.

Lane heads to Virginia Tech on the back of a career year in 2022. He led the Blue Raiders with 69 receptions for 940 yards and five touchdowns. Meanwhile, the MTSU standout had some of his best performances in the program’s biggest games. A career-high single-game 130 yards helped MTSU shock Miami (FL) before putting up 179 yards on eventual Conference USA champions UTSA.

Lane ended his MTSU career on a high, racking up 111 yards and a touchdown in the Hawaii Bowl win over San Diego State. His commitment to Virginia Tech gives the Hokies a slot receiver who has the speed to take a short pass and make a big play. He’s dynamic in space, with the agility and footwork to make a man miss both as a receiver and returner. Additionally, he offers some physicality and contact balance to be able to extend plays.