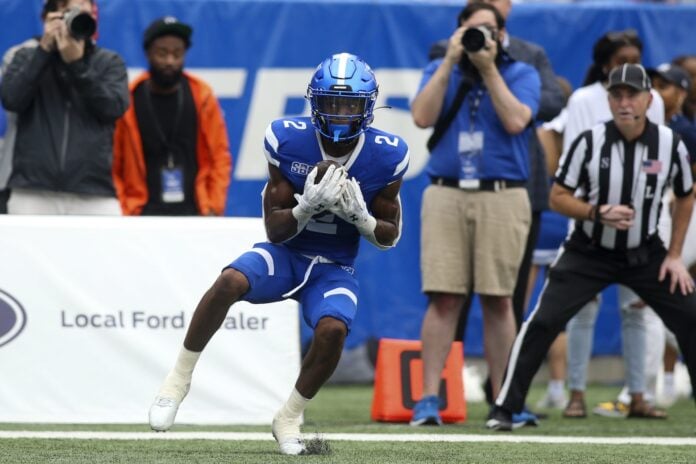 Louisville is looking to find WR success from the transfer portal for the second consecutive season with the addition of the talented Jamari Thrash.

As per a simple announcement on his personal social media on Jan. 8, Thrash has committed to continue his college football career with the Cardinals. Entering just four days earlier, the former Georgia State wide receiver — who is coming off a career year — proved a hot property in the transfer portal and becomes the latest player to announce their intention to play for Brohm’s Louisville team in the 2023 season.

Thrash led the Panthers in 2022 as the go-to target for quarterback Darren Grainger. Snagging 61 receptions, Thrash surpassed 1,000 receiving yards for the first time in his career. He also led Georgia State with seven touchdown receptions — another single-season career-high for the Georgia native.

Establishing himself as a dangerous deep threat, Thrash averaged 18.4 yards per catch in his final season in Atlanta and finished 2022 with three consecutive 100+ receiving-yard games.

A former All-State receiver for Troup County High School, Thrash was a three-star recruit in the 2019 recruiting class. While receiving some Power Five attention from in-state Georgia Tech, his only offers came from Group of Five and FCS schools despite being viewed as one of the top wide receivers in the state.

After committing to Georgia State, Thrash saw minimal action as a true freshman before redshirting. His role increased slightly in 2020, but it wasn’t until his redshirt junior season in 2021 when Thrash began to showcase his true talent, earning a starting spot against Army. A then-career-high 103-yard showing against Arkansas State towards the end of the 2021 season set the scene for his ascension into the national spotlight this past year.

Louisville found success in the transfer portal last fall, with former Central Arkansas wide receiver Tyler Hudson proving the leading target for quarterback Malik Cunningham. Hudson snagged 69 receptions for 1,034 yards at 15.0 yards per catch while adding two scores. However, he heads to the 2023 NFL Draft despite one year of eligibility, leaving something of a hole in the Cardinals’ receiver room as they look to transition to life without their record-setting QB.

Thrash gives them a strong-handed pass catcher with an excellent catch radius to be a threat at the catch point. Meanwhile, with excellent footwork, he’s able to create separation on release and during his route.