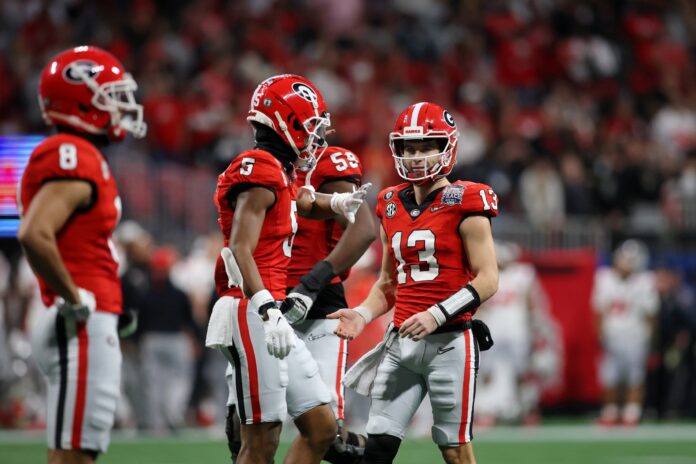 With the college football season over following the 2023 National Championship, how do our final 2022 Top 25 College Football Power Rankings look?

After just over four months of incredible and unpredictable action, the 2022 college football season officially came to an end with Georgia’s dominant victory in the 2023 College Football National Championship. Now that the season is over, how do our final 2022 Top 25 College Football Power Rankings look?

It was always the Georgia Bulldogs. When we look back at the 2022 college football season, the clues were there to see right from the Chick-Fil-A Kickoff Game where the Bulldogs feasted on the Oregon Ducks. We allowed ourselves to doubt Kirby Smart’s team when they limped past the Missouri Tigers and weren’t particularly flashy against Kent State. When they survived a missed Noah Ruggles field goal to scrape into the title game, we allowed ourselves to believe that TCU had a chance of taming the Bulldogs.

The truth of the matter is that the Bulldogs have been quietly imperious on their march to a historic College Football National Championship defense and the top spot in our final 2022 Top 25 College Football Power Rankings. In the title game itself, they were anything but quiet, dominating in devastating fashion.

One of the best offensive lines in the nation, arguably the top tight end in college football, an incredible defense packed with playmakers, and the most unlikely quarterback sensation in Stetson Bennett IV all comes together to form college football greatness. There’s a lot of young talent on this team, don’t be surprised to see them continue at the top in the 2023 season.

For some, the nature of their capitulation in the 2023 College Football National Championship Game should ensure a rapid descent of TCU’s standing in our final 2022 Top 25 College Football Power Rankings. But where would they go? Below a Michigan team that they defeated in the Fiesta Bowl? I don’t think so. So if you move TCU down but not below Michigan, does that mean Ohio State’s narrow defeat to Georgia should see the Buckeyes leap over both TCU and a Wolverines team that dealt them defeat. Also, no.

MORE: Who Has The Most College Football National Championships?

Although they proved woefully uncompetitive on the biggest stage, there’s no doubt that TCU earned their right to be there in Los Angeles. The Horned Frogs defeated six teams who were ranked at the time they played them, including that Fiesta Bowl win over Michigan. The fifth-ranked scoring offense in the nation powered them to that point, with the performances of Max Duggan worth considering when weighing up their rankings résumé. With several transfer portal wins, Sonny Dykes’ team is well placed for 2023.

2022 was a season that promised much for the Michigan Wolverines. Behind an incredible offensive line, Blake Corum emerged as one of the top running backs in the nation. Despite substantial losses to the NFL draft, Michigan’s defense was one of the best in the nation. Top 10 on both sides of the ball, they had the balance craved by the CFP Selection Committee.

After beating Ohio State in dominant fourth-quarter fashion, some argued that Michigan had a claim to be the top team in our College Football Power Rankings. However, they were routinely exposed defensively by TCU in the Fiesta Bowl, and the offense wasn’t good enough to squash the Horned Frogs. As a result, they end the year third in our top 25 college football rankings.

Averaging 44.2 points per game, the Ohio State Buckeyes ended the 2022 college football season with the second-highest-scoring offense in the nation. Meanwhile, their defense finished the year ranked 14 spots higher than the previous season, with a noticeable improvement on the field in the first season with Jim Knowles as the defensive coordinator.

Despite criticism of their schedule, Ohio State defeated Notre Dame and Penn State, as the combination of C.J. Stroud and an offense loaded with weapons swept aside almost all challengers. Sadly, defeat to Michigan was a stain on the season that impacted their standing in our Top 25 College Football Power Rankings. How different it might have been if they had defeated Georgia.

Alabama dipped as low as 10th in the AP Poll this season, almost unheard of territory for a program where anything short of a national title is considered failure. A roller coaster of a season saw them scrape wins against Texas, Texas A&M, and Ole Miss, while losses to Tennessee and LSU really compromised Alabama’s standing in our Top 25 College Football Power Rankings.

The Tennessee Volunteers were left to rue what might have been after a year that exceeded preseason expectations while disappointing in November. A 63-38 shellacking at the hands of South Carolina means that they end the season just behind Alabama in our Top 25 College Football Power Rankings despite their win over the Crimson Tide in mid-October.

Ending the season as the No. 1 ranked scoring offense in the nation was a phenomenal way to start the Josh Heupel era in Nashville. If they could have just shorn up their secondary, the Vols could have been knocking on the door of the College Football Playoff. The manner of their win over ACC champion Clemson sees them secure a top-six spot in our final rankings.