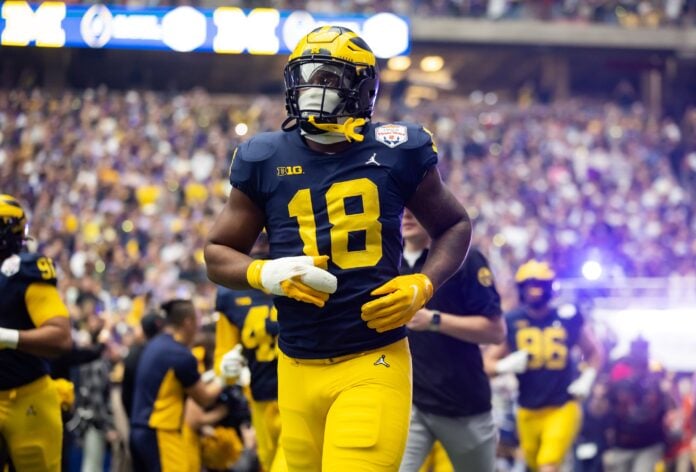 The Charlotte 49ers make a significant splash in the transfer portal by landing former Alabama and Michigan outside linebacker Eyabi Okie.

Charlotte will begin the 2023 college football season in the American Athletic Conference with a Big Ten talent on their roster, as former Michigan outside linebacker Eyabi Okie joins the 49ers from the transfer portal.

Okie — formerly known as Eyabi Anoma before changing his name while at Michigan — links up with former Wolverines associate head coach Francis “Biff” Poggi in Charlotte. The former five-star recruit is a significant coup for the 49ers, albeit not an unexpected one. From the minute Okie entered the transfer portal on Jan. 12, 2023, Charlotte was earmarked as a destination for the exciting outside linebacker.

To outsiders, it might not appear immediately obvious. However, the new Charlotte head coach is an integral factor in the 49ers luring a player who has played for both Alabama and Michigan. Poggi has often been credited with bringing Okie to Ann Arbor last season, and the renowned coach has been a significant presence in the young pass rusher’s life prior to that.

Okie played for Poggi at Saint Frances Academy in his native Baltimore, a powerhouse high school football program in Maryland. There, the new Charlotte OLB tallied 46 sacks in two seasons while achieving consecutive undefeated seasons. As a result of his success, Okie was a five-star recruit and considered the top player in Maryland as well as the 24th-ranked player in the 2018 recruiting class.

Okie’s journey to being reunited with Poggi has been beset by pitfalls. Okie earned SEC All-Freshman honors with Alabama in 2018 but was later dismissed from both the Crimson Tide and Houston. His career recovery began at UT-Martin, where he earned OVC All-Newcomer honors after tallying 9.5 tackles for loss and six sacks. That production and the skill set behind it powered a transfer to Michigan, where he sacked C.J. Stroud in “The Game” and featured in the Fiesta Bowl loss to TCU.

What can Charlotte fans expect from their new addition? The 6’5″, 244-pound OLB boasts a ridiculous first step from the outside linebacker position, exploding into opposing backfields with dangerous intent. He’s a hyper-athletic pass rusher with incredible power who can either bully or blow by his opponent.

Reuniting with the coach who’s extracted the most out of his talents at the high school and college levels should be an exciting prospect for fans, coaches, and Okie himself. After a difficult 2022 campaign for Charlotte, this early transfer portal success could be the springboard to something special in the 2023 college football season.

Quick facts include statistics while in the FCS with UT-Martin.