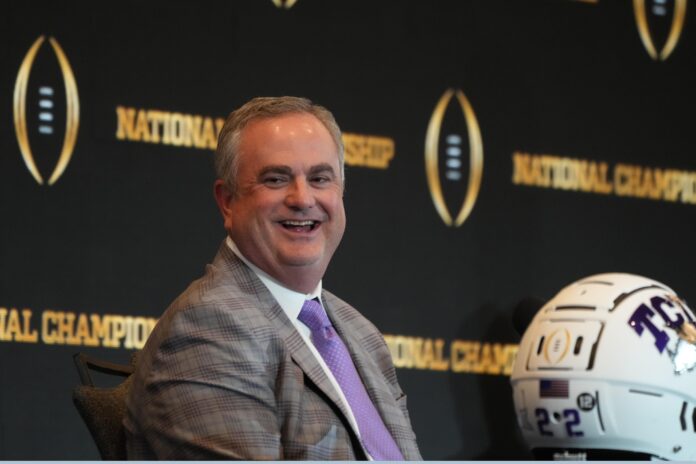 While a first-year coach can be lightning in a bottle for some programs, the truth remains that success is built over time. That is, except for these coaches.

We talk a lot about first-year head coaches and what they bring to their new programs. While most need some time to get the ball rolling at their new school, a few find ways to take their teams to heights no one expected. Today, we take a look at 10 college football coaches that didn’t waste any time in their first year making some serious noise.

Taking over for Gary Patterson wasn’t going to be easy. After all, the former Horned Frog legend has a statue outside of Amon G. Carter Stadium. Sonny Dykes did well at SMU, finishing 30-17, but nothing indicated that a College Football Playoff run was in the cards in 2022.

An explosive offense led by quarterback Max Duggan and receiver Quentin Johnston gave TCU a new look, and it was a roller coaster ride to the postseason.

MORE: Where Is the Birthplace of College Football?

Duggan didn’t start to begin the year, TCU nearly fell to Dykes’ former team, and the Horned Frogs lost the Big 12 Championship Game. They won 10 of their games by 10 points or less, including a thrilling 51-45 win over Michigan in the playoff to face Georgia for the National Championship.

While a monumental blowout ensued to the tune of a 65-7 win for Georgia, the Frogs’ run was a special one. One game shouldn’t change what TCU did in 2022.

Here’s a perfect example of how one game can cement your legacy forever. Chris Petersen did it in his first season with the Broncos. Boise State began the season unranked, but finished the year 13-0 and moved all the way up to fifth.

In arguably the most memorable college football game of all time, the Broncos pulled off a stunner by upsetting Oklahoma. Led by the sensational Adrian Peterson, the Sooners expected to run over Boise State. The first-year head coach drew up a handful of stunning trick plays, including the infamous hook-and-ladder to tie the game and the Statue of Liberty to win it.

Boise State finished the season as the only undefeated team in the country, and Petersen went on to a 92-12 record with the Broncos.

Speaking of jaw-dropping plays, Malzahn’s Tigers produced a number of their own en route to a National Championship appearance. Auburn’s head coach took over for Gene Chizik after serving as the offensive coordinator for his predecessor and took the Tigers’ offense to a new level.

Auburn averaged 39.5 points per game in Malzahn’s first season as head coach. They scored 50 or more points in 3 games, including 59 in the SEC Championship Game. The most notable part of this run came from two highlight reel plays to end the regular season.

The Prayer at Jordan-Hare stunned Georgia in dramatic fashion, and the Tigers found a way to top that with the Kick Six against Alabama the next week. Auburn gave up a last-minute touchdown to Florida State in the National Championship to lose 34-31, but the wild year put Malzahn on the map as a head coach.

Arguably the best college football team of all time followed the lead of Larry Coker. The only downside here is that Coker inherited this team, so it’s tough to put him higher on this list, but it was still an impressive season for the ‘Canes.

They started the year ranked second and won every game but one by double digits. They won four games by at least 40 points, and three by at least 58. This roster included big names like Clinton Portis, Willis McGahee, Frank Gore, Andre Johnson, Jeremy Shockey, Ed Reed, Antrel Rolle, and Jonathan Vilma.

Coker had huge expectations to sustain, and to his credit, he found a way to bring home a title, even if it wasn’t with a team he built.

Before the Cincinnati College Football Playoff hype, there was Tom Herman and the Houston Cougars. The former Ohio State offensive coordinator took over a Cougars program that went 21-17 in the three years prior to his arrival.

Herman’s #HTownTakeover movement didn’t take long to turn the program around, and the hype reached levels we’d never seen before for a Group of 5 team.

MORE: Who Has the Most College Football National Championships?

Houston started the year 10-0 before falling to UConn. They quickly bounced back to win the AAC Championship two games later.

A 10-2 Florida State team stood in their way (one that was just 16 points away from being undefeated), but Herman’s squad would jump out to a 21-3 halftime lead before winning 38-24. It essentially started the playoff hype for Houston, followed by the signing of five-star recruit Ed Oliver, and eventually seeing the Cougars jump all the way up to number six in the 2016 AP Poll.

It wasn’t an easy task to inherit the defending National Champions. UCF had a target on their back all year, and Heupel weathered the storm quite impressively. The Knights put up points in a hurry all season, scoring 50 points in 4 of their games.

Arguably the most impressive feat for Heupel was bringing his teams back from 30-17 and 38-21 halftime deficits against Memphis that year. The latter came in the AAC Championship. UCF finished the regular season undefeated, with a chance to claim another National Championship, given they weren’t selected for the College Football Playoff.

While they were unsuccessful in finishing the year undefeated, they nearly stunned LSU in the Fiesta Bowl. A 40-32 loss stung quite a bit, but they also get credit for beginning the legend that is LSU Tiger quarterback Joe Burrow with a monster hit — same Burrow that led arguably the greatest college football team ever.

Prior to Bowden taking over for the legendary Pat Frye, the best record by a first-time head coach with the Tigers was back in 1908 when Mike Donahue went 6-1. With plenty of adversity to overcome, Bowden knew the 1993 season would be challenging.

He inherited a roster that went 2-5-1 in 1992 and inherited NCAA probation too. This was a battle-tested group, winning eight of their 11 games by two scores or less. They beat #4 Florida 38-35, a team they would have faced in the SEC Championship Game if they were eligible.

Despite the negatives about Urban Meyer, taking over his program isn’t exactly the most desirable job. Ryan Day took over for Meyer in the 2018 season (finishing 3-0), but it was the 2019 season that was his first full year.

The Buckeyes were able to snag Justin Fields from the transfer portal to run their offense, and it resulted in a College Football Playoff berth in Day’s first year. Ohio State steamrolled its competition early, winning the first five games by a combined 262-43. They scored 70 or more points twice that year and scored 50 or more in six of their games.

While Day and his team fell short in a 29-23 Fiesta Bowl loss to Clemson, the impressive year eased concerns about his ability to lead this team. The offense was still in good hands, and it became clear the program would not be taking any steps backward.

Oklahoma wasn’t eligible for a bowl game in ’73, but that was fortunate for other teams. The beginning of the Switzer era was a warning shot to the entire country. His Sooners finished 10-0-1 and third in the country. Switzer would start his tenure in Norman 32-1-1 and end with a career record of 157-29-4.

A 7-7 tie against #1 USC in the second game was the only game they didn’t win, but they didn’t struggle much after that. They won the next nine games by a combined margin of 239 (26.5 points per game) and notched six ranked wins in the process.

When you think of Fresno State, you typically think of David and Derek Carr. The brothers were two of the most prolific players to ever come through the program, but Jeff Tedford deserves to be in the conversation of top Fresno State names as well.

Before Tedford arrived in Fresno, the Bulldogs went 10-28 the three years prior. In desperate need of a change, they brought in a new face.

It would have been easy to jump ship after a tough 1-2 start (including blowout losses to Alabama and Washington), but Tedford’s squad didn’t quit.

Fresno State fought its way into the Mountain West Championship Game before falling 17-14 to Boise State. They finished the year 10-4, and that was the first step to getting Tedford promoted too.